TorchDynamo Update 10: Integrating with PyTorch/XLA for Inference and Training

with Will Constable, Jason Ansel
with Jack Cao from Google PyTorch/XLA team

TLDR: We’ve built a prototype bridge to integrate dynamo with PyTorch/XLA. We benchmarked the bridge on a subset of 10 pytorch/benchmark models. For inference, we verified the numerical correctness and achieved 1.5x geomean speedup on GPU and 1.8x geomean speedup on TPU compared to PyTorch/XLA baseline. For training, we verified the numerical correctness, summarized the overall perf result (overall slightly better than neutral) on GPU and analyzed the cause of the slowdown on some models.

There are 2 major motivations to integrate dynamo with PyTorch/XLA. For one thing, this enables users to run models on TPU thru dynamo; for another thing, we can leverage dynamo’s guard system to skip the PyTorch/XLA tracing overhead.

Dynamo and PyTorch/XLA leverage different mechanisms to guarantee sound graph capture (check The nuances of PyTorch Graph Capture for a comprehensive comparison of different graph capture techniques). Dynamo leverages its guard system to record the conditions that need to be met to apply a captured graph. The guard system is very lightweight in its cost. On the other hand, PyTorch/XLA trace the graph for every run and maintain a hash for the graph. A previously captured and optimized graph will be reused if the hash hits the cache. The tracing overhead varies depending on the model but it’s usually quite high.

Naively integrating dynamo and PyTorch/XLA together, we will have both dynamo’s guard system and PyTorch/XLA’s tracing system to guarantee sound graph capture. That’s redundant. Instead we want to let PyTorch/XLA trace the graph once at compile time but skip the tracing step completely at runtime. This potentially can bring speed up at runtime because of reducing tracing overhead to 0. The soundness of the graph will be guaranteed by the lighter weight guard system in dynamo.

Here are the previous dynamo updates:

All the tests for GPU are done inside the PyTorch/XLA docker container ( Google Cloud console ). The relevant spec for the host system: 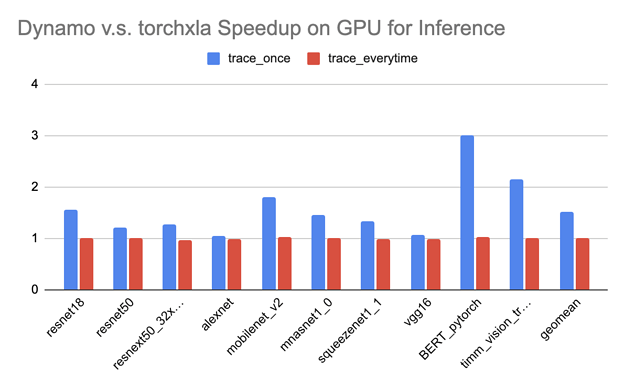 We use PyTorch/XLA as the baseline. Dynamo’s benchmarking script uses PyTorch eager as the baseline by default. But we think it’s more convenient to use the same framework for baseline and test to avoid numerical differences introduced by different frameworks.

To make the test complete, we built 2 bridges to integrate dynamo with PyTorch/XLA. ‘trace_once’ is the bridge that traces once at compile time and skips tracing at runtime. ‘trace_everytime’ is the trivial bridge that still does PyTorch/XLA trace for every run. Without explicitly mentioning, a bridge refers to the ‘trace_once’ bridge in this note.

Here are takeaways from the testing result:

Here is a trace for resnet50 to illustrate the perf win (note enabling profiling may cause inaccurate time measurement, just get a high level understanding of the time cost): 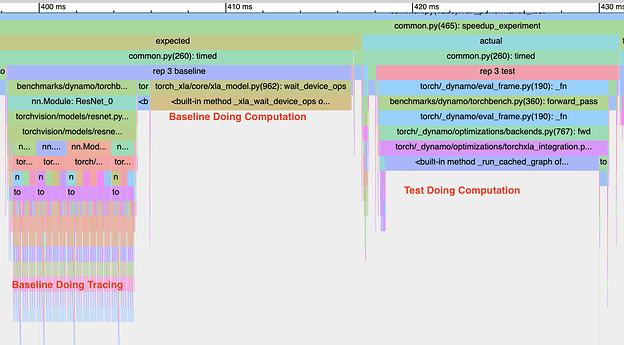 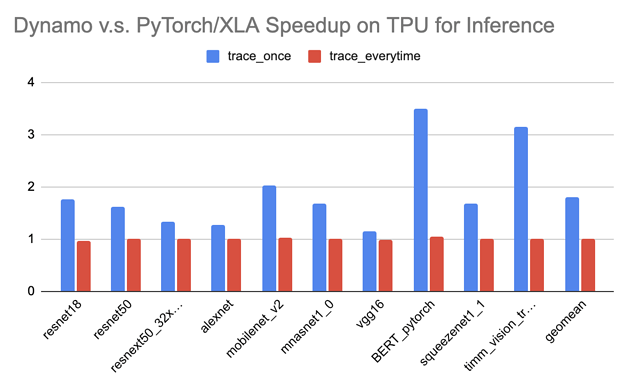 For the result on TPU, we see the trace_once bridge has an even larger geomean speedup: 1.8x . The reason is the TPU devices are more powerful than the GPU we use for testing. With a powerful device, we have faster computation. Avoiding tracing thus has a bigger impact for powerful devices. E.g., for resnet50 the computation time on TPU and GPU are 6.7ms v.s. 20.7 ms respectively. Technically, we also have more powerful CPUs on the TPU environment, so the tracing overhead should also be smaller but the impact is not as big as the reduction of computation time.

The trace_everythime bridge is also neutral as on GPU which shows dynamo overhead is very low.

Training is much trickier than inference for the integration:

Even though, we still want to explore integrating dynamo with PyTorch/XLA for training since

Here are the results for training: 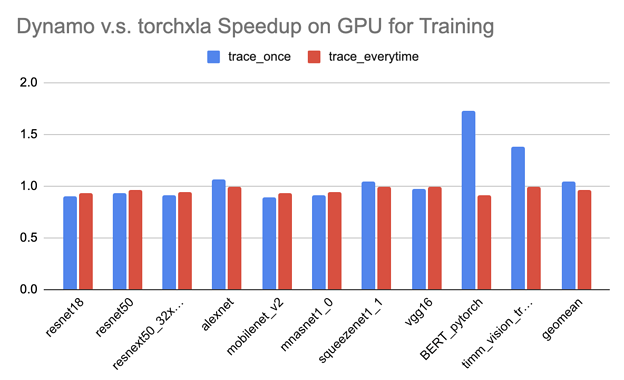 Some notes about the result:

Some takeaways from the result

Dive into the perf number for the resnet50 on GPU

We dive into the perf number for the resnet50 model. We think the perf number is mainly determined by the interaction of the 3 factors: reduce_tracing_overhead, penalty_for_graph_breaks and penalty_from_aot_autograd .

The bridge incurs penalty_for_graph_breaks since we generate multiple graphs for training. A typical training loop has the following steps: zero_grad → fwd → bwd → optimizer . In our bridge, each of these steps will result in an XLA graph. To understand the impact of graph break, we manually inject a graph break between fwd and bwd graph in the baseline. The XLA ExecuteTime (represents the execution time on the TPU/GPU device) metric increases from 41.2ms to 44.4 ms by 7.8%. We think the graph break causes loss of some fusion opportunities which can cause the perf loss. Let’s also compare the XLA ExecuteTime between baseline (a single graph) and test. There is a 11.9% increase for XLA ExecuteTime metric ( 41.2 ms v.s. 46.1 ms ).

Here is one idea to bring back the perf loss. We rely on dynamo to capture the guarded graph for forward pass. Then use PyTorch/XLA to construct the whole forward/backward/optimizer training graph. In the bridge we reuse the whole training graph directly. This proposal also avoids the overhead introduced by graph break between forward, backward and optimizer. But it may be hard to apply this improvement when there is a graph break in the forward pass. We’ll explore this as a follow up.

Deep Dive into Some of the Tech Details

Here is how the bridge works in general. dynamo passes an FX graph (wrapped in a fx.GraphModule) to the bridge. The bridge needs to return an optimized_mod which does the same thing as the FX graph but (hopefully) faster. The input/output to the optimized_mod will match the input/placeholder nodes and outputs nodes of the Fx graph.

In optimized_mod we need to call the saved XLA graph. But the input/output of the XLA graph can be very different to the Fx graph input/output.

The input to a XLA graph are all the DeviceData nodes collected in trace order. A DeviceData node is defined as a leaf node representing data rather than computation in PyTorch/XLA IR. Some of these DeviceData nodes represent Fx graph inputs but some may just represent const tensor/scalar implicitly defined by some certain op. E.g. the alpha parameter in the add op (pytorch/native_functions.yaml at master · pytorch/pytorch · GitHub ). The FX inputs may spread in different order in the XLA graph input because the latter is defined by the tracing order. We build a GraphInputMatcher class to construct XLA graph inputs based on the FX graph inputs and the const tensor/scalar collected during tracing time.

XLA may return a different list of outputs compared to FX graph output. e.g., XLA does not return an output if it’s also an input unless the tensor is inplace updated. XLA will also deduplicate the same outputs. All these cases indeed happen for FX graphs generated by AOTAutograd. Check verify the number of outputs of xla graph by shunting314 · Pull Request #89536 · pytorch/pytorch · GitHub for details.

Random seed is also represented as a DeviceData node. But it’s special since we need to pass in the proper seed value maintained by XLA at runtime to the XLA graph to guarantee the same randomness between test and baseline. Improper handling of random seed causes ops like Dropout to produce different results for test and baseline.

In an earlier version of the implementation, we let dynamo trace the model on the CPU. Before and after running each optimized_mod, the bridge needs to move input/output between CPU/XLA. This causes performance loss. It’s an even severe problem when applying AOTAutograd since the fwd/bwd graph generated by AOTAutograd used to have a lot of tensors as inputs and outputs.

Later on we changed to let dynamo trace the model on XLA directly. This improves the geomean speedup from 1.4x to 1.5x on GPU for inference. Also the UX is more similar to how people usually enable PyTorch/XLA.

More detail in [Feature Request][XLA] Support fallback for the dynamo-xla bridge · Issue #1823 · pytorch/torchdynamo · GitHub, it is an implementation assumption that xla will return a single hash for a given fx graph, but we can’t do that when there is a fallback. Sherlock seems to have something that might help xla to tell upstream about its fallback condition and let dynamo break the graph for xla, but we need to look into a bit more in that.

As Jack also mentioned, we have some ideas and can follow up on this.

If it’s just to implement dynamo’s xla backend, I think reimplementing the fx-to-xla lower logic using the xla client in jaxlib is a much cleaner and more performance guaranteed way to do it. Because there are many similarities between jax and torch[dynmao].

If is to improve the current graph fragmentation mode support capabilities of LTC + xla. I think that LTC needs to be re-engineered for implementation, previous compatibility with TPU node mode resulted in high overhead for ltc and eager mode data representation and data exchange now. I don’t think this is an inherent problem with the lazy execution itself, but just a result of the engineering implementation.

I think by TPU node mode you mean XRT runtime and its client-GRPC server nature? We are working on deprecating the XRT runtime and replace it with the PJRT. Do you mind sharing what other overhead you have in mind? When dynam works, lazy bridge code should only be trigged by the first time, and the rest of the execution shoud be directly calling the runtime to execute the graph. Lazy code still handles the part that convert the DeviceData back to the at::Tensor representation but I don’t think that is too costly.

We chose to do our first prototype using lazy because it is the most convenient way. For feature like DS, SPMD, FSDP we already need to implement it for lazy, the engineering cost of reimplement everything with dynamo is too high. There is a possibility for xla to provide a native dynamo implemantion without lazy bridge, but that’s more long term. We want to make sure the proof of concept bridge works well enough.

the engineering cost of reimplement everything with dynamo is too high. There is a possibility for xla to provide a native dynamo implemantion without lazy bridge, but that’s more long term.

What’s the impact from UX interface point of view?
Can user turn on XLA use the one liner torch.compile(backend = “xla”)?

That’s goal, for inference I think we are already pretty close. You can check our simple test at xla/test_dynamo.py at master · pytorch/xla · GitHub, where our backend is called torchxla_trace_once . For training it is more complicated since we need to worry about distributed story etc. Eventually we hope user can turn their model to xla by a simple string swap of backend.