The nuances of PyTorch Graph Capture

I have always had trouble explaining to outsiders what PyTorch compilers truly are. In my previous careers, I could point to an anchoring infrastructure. But, PyTorch compilers have been constantly morphing – with new solution stacks or IRs popping up every half, each partially overlapping with previous solutions. Why is that?

Why are PyTorch Compilers Plural?

PyTorch compilers are plural because there is no single mechanism to convert PyTorch programs into IR forms (or graphs ).

Other ML frameworks have either graph abstractions built into the programming model (e.g., TF) or the evaluation model (e.g., TVM), or a language frontend (e.g., Relay) that can be deterministically converted into IRs. In contrast, graph capture for an eager-first ML framework like PyTorch is non-trivial and design space in itself . To a large extent, the solution space of PyTorch compilers reflects the evolution or fragmentation of PyTorch graph capture mechanisms.

The rest of the post dives into the nuances of the PyTorch graph captures and tries to offer a framework for understanding all of them.

PyTorch Graph Capture according to UX 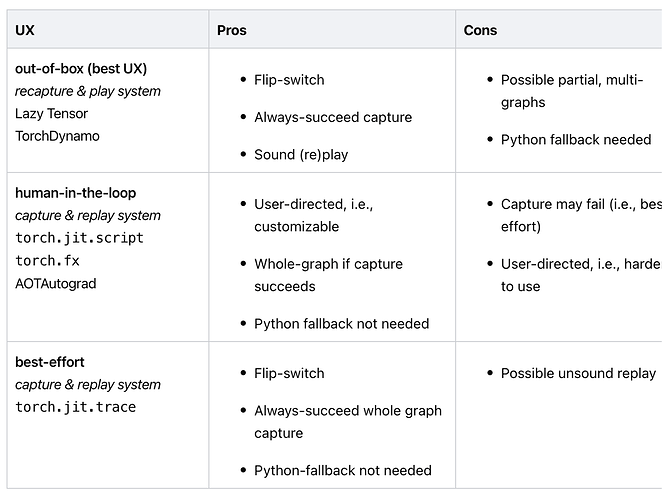 We gauge user experiences based on the following metrics:

To aid references, we give short names for each bucket

Two traits influence the soundness and usability of a graph capture & replay system.

It matters when a graph is captured

A system can capture graphs at different stage of a model execution life cycle, which leads to different overhead, IR semantics, and composability.

On lowering to aten IRs

Dispatcher-level tracing has a huge advantage of lowering to Aten IRs in a way that is naturally consistent w/ eager execution. For instance, TorchDynamo uses torch.jit.trace() to lower from captured Python Bytecode graphs to TorchScript IR. This process is sound because TorchDynamo captured graphs contain no control flow and are shape-specialized. The ongoing explorations of combining TorchDynamo w/ AOTAutograd to capture both forward and backward graphs together and to combine TorchDynamo w/ LazyTensor tracing are all examples of combining before-execution graph capture with tracing-based graph capture that is still sound.

The following picture summarizes different aspects of evaluating a graph capture. This post is just the starting point of understanding the existing design space of PyTorch compilers to lay the foundation for building a truly composable and more stable PyTorch compiler stack. 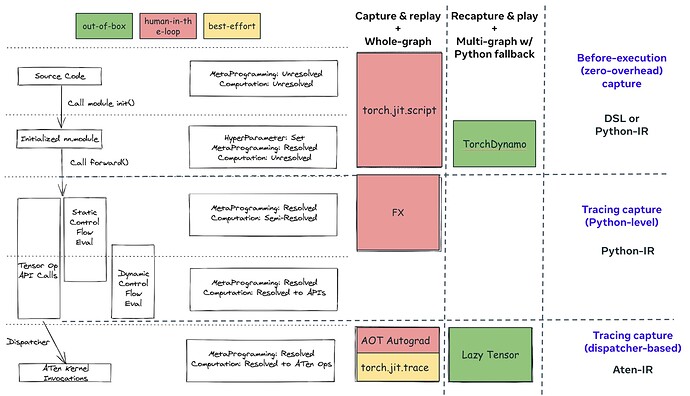 Great and very useful breakdown.
Would torchdynamo.optimize(nopython=True) fit into quadrant (I) of your 2D table?

Several tables in the post and I did not label them :<, so I do not know which table is referred to :).

torchdynamo.optimize(nopython=True) would fall into sound, best-effort, whole-graph capture because the API may fail (by design). But when it succeeds, it will produce a guarded whole graph. This API would also provide diagnostic outputs to help users rewrite model codes to potentially get a successful graph capture. So it also has the nature of a human-in-the-loop tool.

@penguinwu Great! I think another dimension to distinguish those graph capture mechanisms is their capability to fetch control flow graphs versus dataflow. What’s more, dynamic shapes or symbolic shapes can be considered as well.

Thanks for this wonderful write-up @penguinwu !!

Totally agree. This post was written early in the year. Since then, we have made great strides in TorchDynamo (our next-generation graph capture technology). Ed’s weekly posts on the State of Symbolic shape are a great place to get a pulse on our current development of graph capture w/ dynamic shapes.

And please watch out for the upcoming PyTorch Conference (12/02), where much more will be shared.

@penguinwu It is a great article.
After the announcement of PyTorch 2.0, I have one question when I revisit the figure in “Concluding remarks”. My question is “WIll torchscript APIs like torch.jit.script and torch.jit.trace in Python programs be depreciated to capture a graph after PT 2.0?”.

I realized that I am a bit confused. “Will torch.jit.script and torch.jit.trace be depreciated?” is better question.

No, torch.jit.script() and torch.jit.trace() are not yet deprecated because of two reasons:

We do want to consolidate front-end solutions into TorchDynamo organically. The speed of this consolidation depends on how fast vendors integrate to PT2 stack and how soon we have PT2 export ready.

Thank you very much for the quick clarification.