TL;DR: Previously, torchdynamo interrupted compute-communication overlap in DDP to a sufficient degree that DDP training with dynamo was up to 25% slower than DDP training with eager. We modified dynamo to add additional graph breaks when DDP is detected in order to restore opportunities for compute-communication overlap. With these new changes, DDP with dynamo is never more than 1% slower than DDP with eager and up to 15% faster than eager on 64 gpus when compiled with torchinductor. These results are based on benchmarks from 6 OSS models.

If you are new to TorchDynamo, the links below will allow you to catch up on the new exploration. TorchDynamo generates FX graph from Python bytecode and various backends are integrated with TorchDynamo to complete inference/training of the model. In the future, with the help of a cost model, TorchDynamo could automate the selection of the best backend for each subgraph to achieve optimal performance. 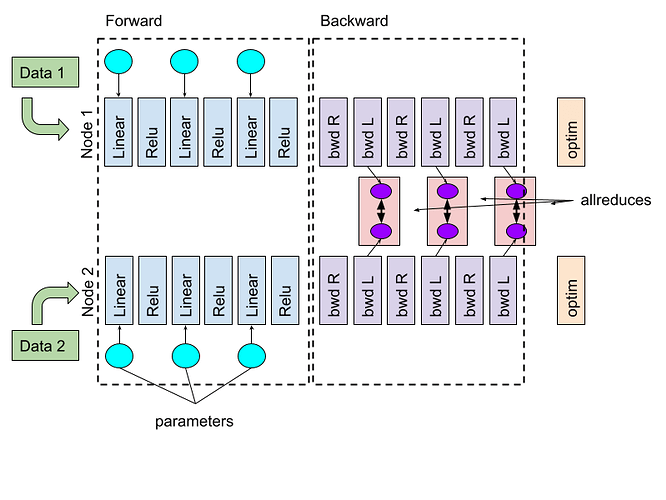 In the figure above, we see that steps 4 and 5 are combined by allowing allreduces to start before the backward pass has completed. This speeds up the training process by overlapping some of the communication with the rest of the computation of the backward pass. This is how eager DDP training works today. By default, the allreduces are gathered into “buckets”, which are chosen via a heuristic that tries to produce 25MB buckets (the size is configurable).

However - once we enable dynamo, dynamo compiles the individual kernels into a single graph (or a small number of graphs, if graph breaks occur). Then synchronization can’t occur until the entire backward pass has completed. 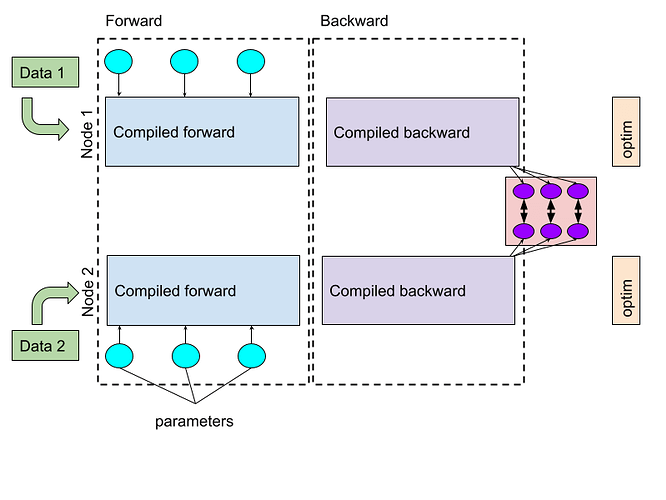 In the diagram above, we see that with naive usage of dynamo, DDP allreduces don’t start until the entire backward pass computation is finished. In many cases, the lost opportunity for communication/compute overlap can be more significant than the speedup provided by inductor. 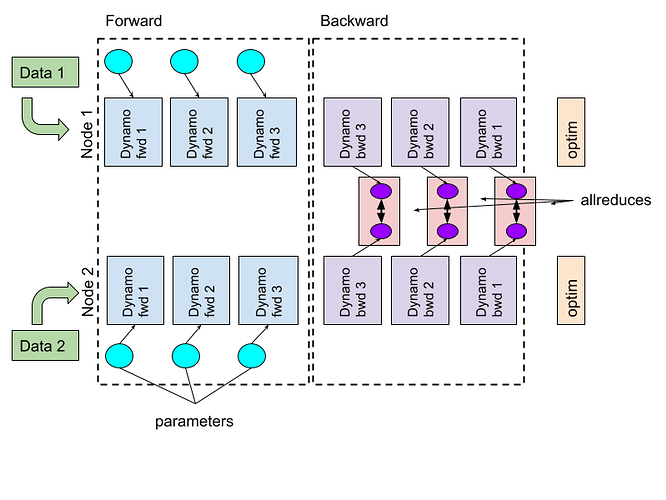 The heuristic used by the DDPOptimizer won’t always produce buckets that are identical to those produced by eager DDP; we are assuming that the eager DDP strategy heuristic isn’t perfect either, especially in cases where additional graph breaks may occur.

Without the DDPOptimizer, we can compare DDP+dynamo latency to DDP+eager latency, and we find that for >1 node, dynamo can sometimes perform as much as 25% worse than eager. 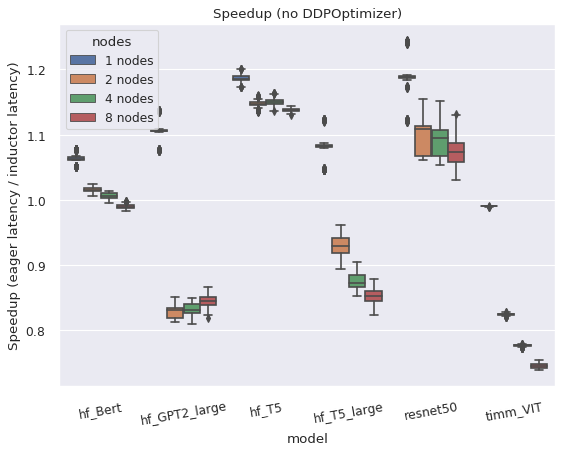 With DDPOptimizer enabled, we do the same comparison and see that DDP performs no more than 1% worse than eager - and is up to 15% faster in some of the 64-gpu configurations 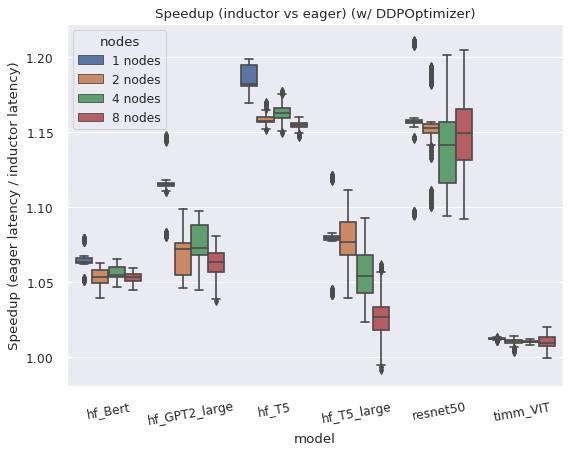 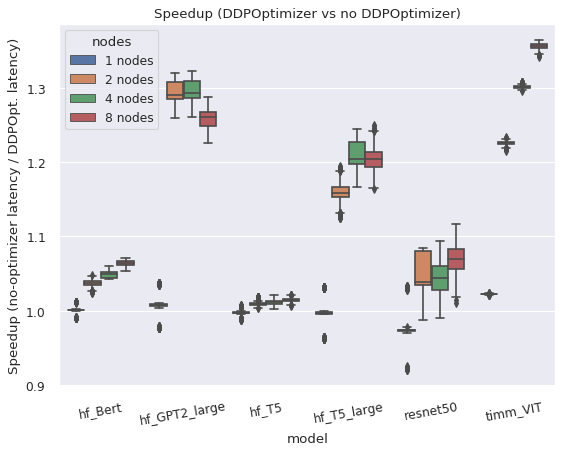 @wconstab ran the entire dynamo benchmark suite with DDPOptimizer on a single GPU; only 1 new issue was encountered, an AOTAutograd issue that was filed separately.

We also did correctness checks on the 6 OSS models, using the same multi-node setup used for the performance measurements. Note that these benchmarks were performed using a separate torchbench benchmark setup, so we wanted to do a minimal set of correctness checks to verify correctness on the same suite used for measuring performance. On these tests, we found 5/6 models passed correctness; the remaining model (resnet50) is also failing on non-distributed inductor tests.

1. DDP needs to be run with static_graph=False.

Static graph is an optimization for eager DDP. It relies on assumptions about the behavior of the program remaining the same - e.g. gradients for the same set of parameters must always be made available in the same order on each invocation. It allows a few optimizations:

In the 6 OSS models we tested, we don’t see any measurable impact on performance from static_graph=True (at least in eager mode). However, some other models are known to benefit from these optimizations.

Unfortunately, dynamo + DDP currently doesn’t work with static_graph=True. (This is because DDP interprets any tracing as a first step during which it intends to collect data about the run; and then subsequent iterations fail some assertions).

We expect that it should be possible to add some workarounds to support this - but currently, static_graph needs to be turned off to work with dynamo.

Cudagraphs show performance improvements in many scenarios, but also increase memory usage in other scenarios. Because DDPOptimizer creates additional graphs, it exacerbates these memory issues. Therefore we expect many users to need to turn off cudagraphs to be able to run with DDPOptimizer.

Huge thanks to @sanketpurandare; the benchmark scripts were adapted from his script and results from his initial work on DDP benchmarking. He also provided a lot of help debugging bad performance.

OSS DDP benchmarks can be run using the same script at:

Note that the script is mostly targeted for use with a slurm-based setup.

Feel free to adapt these scripts for your own distributed benchmarking.

We’re working on merging this into the typical userbenchmark workflow for torchbench, so that testing can be automated. A big thanks goes to Xu Zhao for his help

A few lessons we learned when running these experiments:

Is there a comparison of memory usage data before and after using DDPOptimizer? Especially those models that can capture the full graph before. thanks