Functionalization in PyTorch: Everything You Wanted To Know

Hi all! Posting a long-overdue note on functionalization: a piece of infra in PyTorch core that’s gotten a lot of attention over the last year, due to the rising importance of compilers in PyTorch.

This will be a pretty long note, so quick table of contents:

What is functionalization / why is it important?

Functionalization is a piece of infra: it serves to relieve tension between two goals in PyTorch that are at odds with each other:

An easy-to-illustrate example would be this PyTorch code:

When we’re compiling, we want to be able to get out a functionally “equivalent” version of the above program, but with no mutations in it!

I said “compilers don’t like mutations”, but what are some examples in our stack today where this is important? To name a few:

Another way to look at it is: you could imagine a version of PyTorch with no user API’s for mutation or aliasing. But view + mutation ops in the PyTorch surface API are pretty great! They provide two benefits:

How does it work?

In fact, it’s exposed in this way as an API in functorch: 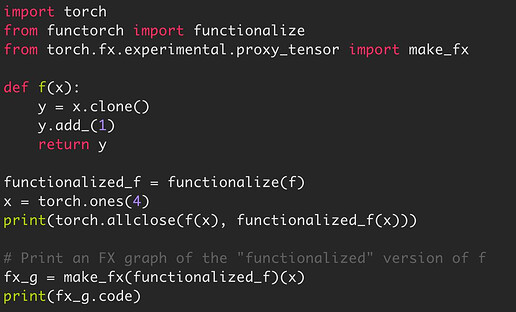 That’s a pretty good mental model to have, at the API contract level. There are a bunch of different subsystems in PyTorch around graph capture and graph transformations. And the contract that functionalization provides is that you give it a function / fx.GraphModule (potentially with mutations), and it returns an equivalent function without mutations.

In pseudo-code, the algorithm for removing mutations looks something like this:

This doesn’t really explain implementation details - that might be for a future post, but there are some more details in these slides.

So if you’re a compiler operating on a PyTorch program post-functionalization, what should you expect?

Below are a few examples of how functionalization transforms some existing PyTorch programs. One thing to note: functionalization operates at the level of our ATen API. In the below examples, I mapped them back to torch ops in some cases, just to make the transformation clearer.

Example 2: mutate a slice: Advanced indexing on tensors usually desugar into ATen operators like aten.slice and aten.select. Given an updated “slice” of a tensor, and the original base it came from, ATen also has a few operators that represent generating the “updated” base tensor: slice_scatter, select_scatter, etc (docs). 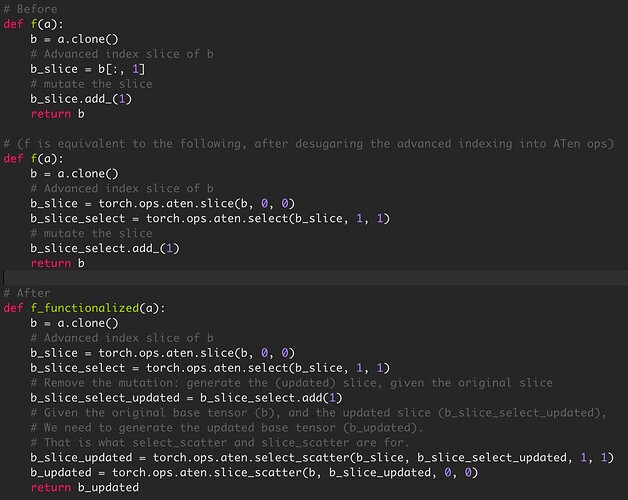 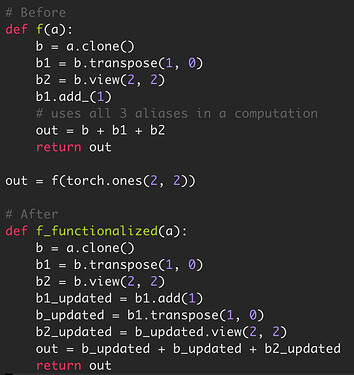 Functionalization: the back story (where did it come from?)

Functionalization involved work from many people over the last few years. A quick timeline of events:

The first version of functionalization started its life ~3 years ago, in the PyTorch/XLA project, under Davide Libenzi. As part of bringing up the PyTorch/XLA project, the team needed a way to convert pytorch programs (which can have mutations), into XLA’s HLO IR (which has no mutations). They pioneered the underlying algorithm and wrote a version of functionalization that acts on PyTorch/XLA’s IR, underneath ATen. This came with some long-standing issues, like aliasing relationships in the graph being severed when you call xm.mark_step(), and not all pytorch view ops being supported.

In mid 2021, Ailing Zhang mentioned the idea of making the functionalization logic more generic and moving it into PyTorch core, operating at the ATen level. In late 2021 the first version of that landed.

Around the same time, Richard and Horace were working on composable function transforms in functorch. After some discussion, in early 2022 we decided to add an API to expose functionalize() as a composable transform in functorch (initial PR, docs)

The mobile team needed a version of functionalization that not only removes mutations, but also fully removes striding from a program - guaranteeing that all tensors are contiguous / densely packed. We did this by adding a new set of {view}_copy variants of view operators that always return contiguous tensors (which is not the case for arbitrary view ops, like .diagonal()), and adding a version of the functionalize() transform that removes view operators, and replaces them with their *_copy() variants. More details on that later in this note.

Throughout 2022, the infra behind PT2 picked up steam (dynamo, aot_autograd, inductor), and we identified gaps where certain programs with mutations couldn’t be compiled. Originally, dynamo had some logic to remove mutations in basic cases, and fall back to eager in more complicated cases. This worked reasonably well, but had some issues: the pass couldn’t see into and detect any mutations that were introduced in the C++ parts of our codebase (C++ decompositions, backward formulas called in autograd). In mid 2022, we added support for functionalization to run directly as part of AOT Autograd (enabled in aot_autograd, turned on in dynamo).

Where does functionalization fit into the PT2 stack? (Case Study)

Here’s a picture of the 10,000 foot view of the PT2 stack, and where functionalization sits in it (sorry the image is a bit small). 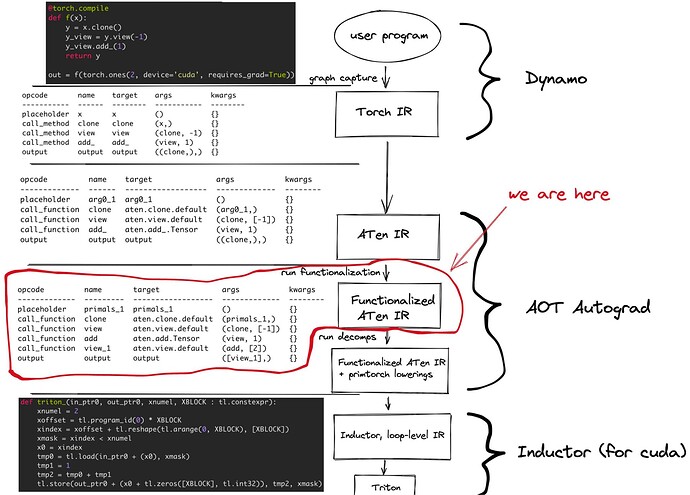 You can see that functionalization is a component inside of AOTAutograd. AOTAutograd does a lot of things, but at a high level it takes a messy forward graph of torch ops, containing mutations, autograd logic, tensor subclasses, and all sorts of stuff from the torch API, and sends clean, lower-level ATen graphs of the forward + backward to a compiler.

How does AOT Autograd use functionalization? There a bunch of interesting edge cases around how AOTAutograd needs to handle external mutations and aliasing in this doc on AOTAutograd 2.0.

An interesting example to look at the interaction between PT2 and functionalization is: what happens if our user code involves mutations and graph breaks? We’ll use this example:

But there’s a problem: In graph 2, “y” is a graph input, and it gets mutated. Graph 2 is stateful: running it causes an observable side-effect .

This particular case is a bit unfortunate:

Does this happen in real user code?

So… does this happen in real models? This example isn’t too contrived - it’s shown up in a number of models in the torchbench suite. For example, you’ll encounter it if you run hf_Longformer:

The problem is that the call to new_zeros() causes a graph break, so “diagonal_attention_scores” becomes a graph input in the next graph. Why?

Note that in this particular example, the graph break is entirely avoidable. We can beef up our tracing infra to handle torch.div(int, int), and treat its output as being known at compile time. Alternatively, someone could update that user code to perform regular python division on the integers, instead of using torch.div.

Note that In general, PT2 operates in a world where graph breaks can happen for any number of reasons - so even if we fixed this particular model, there will plenty of other cases where we end up in this situation: a graph break can promote an “intermediate mutation” in user code into an arbitrary “input mutation” in a subgraph.

FWIW, another case where input mutations will be common in the near future is optimizers: When we compile the optimizer step, the parameters will (usually) be graph inputs that we update based on the gradients.

As stated above, the second graph has input mutations that we need to respect when we compile the graph. Input mutation support in AOT Autograd landed a few months ago.

In the example above, AOTAutograd will take graph 2 from above and create something like this: 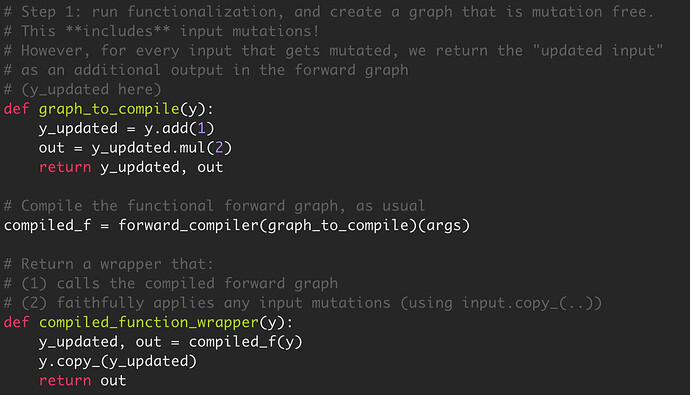 This accomplishes our goal: creating a functional graph to be compiled, and faithfully replicated any observably side-effects from the graph (input mutations), although you might argue it’s not optimal. A future piece of work could be to create a contract with the backend compiler where we agree to send the input mutation into the graph, so the compiler can fuse it.

Case Study 2: specializing on aliasing relationships (and comparison to TorchScript)

Another interesting example is this piece of code: 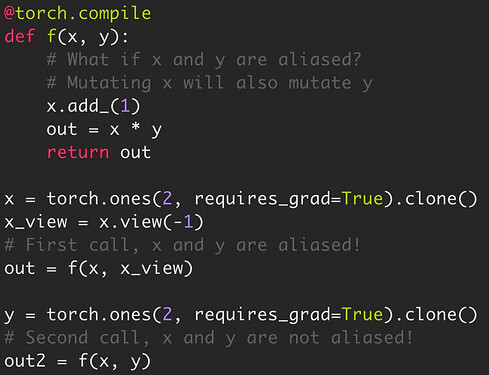 What’s going on here? Our function mutates x, and then does something with y. This program will have different behavior, depending on whether or not x and y are aliased!

The reason this example is interesting is because it shows a philosophical difference in how PT2 decides to compiles programs, versus say, TorchScript. In particular, guarding + specializing .

How will TorchScript (torch.jit.script) and PT2 (torch.compile) differ in the way that they compile this program?

The two forward graphs that AOT Autograd will send to our backward compiler in the two cases above look like this:

In the graph on the right, AOT Autograd ends up creating a graph where:

And that’s it! PT2 effectively specializes on the aliasing relationships of its inputs when created a graph, allowing it to optimize more aggressively.

FWIW, the example as written above is actually partially broken: AOT Autograd still needs to be taught how to propagate guards on the aliasing relationships back to dynamo so that it knows to recompile. Instead, as of 1/4/23 the above code will raise an assert failure on the second call.

Where else is functionalization used in PyTorch?

I mentioned that functionalization is used in other areas of PyTorch, aside from PT2. Two other major areas include:

Mobile also has another requirement: all tensors in the exported graph must be contiguous (memory-dense) . I won’t go into too much detail here, as mobile folks have written about this previously (see post).

The semantics of diagonal_copy() are that it always returns a contiguous tensor; so the original program and the traced one have the same semantics, but all tensors in the traced program are guaranteed contiguous.

PyTorch/XLA is working on migrating to use the version of functionalization from in core. There’s a prototype in the works here. When we migrated the LazyTensor TorchScript backend to usef functionalization, that served as a nice blueprint for XLA to use for integration.

Now that functionalization is pretty battle tested, updating PyTorch/XLA to use it will fix a number of known bugs: one is that the mark_step() API currently severs the aliasing relationship between aliased tensors, which can lead to silent correctness issues.

What Future Work Is There?

There are a ton of people to thank, so I’m definitely going to miss some people. That said:

Thanks @ezyang for countless reviews, design discussions, and useful insights around functionalization over the last year

Thanks @anijain2305 for help with integrating functionalization with dynamo + PT2

Thanks @larryliu0820, Martin Yuan, @tugsbayasgalan and others from the mobile team for working to think through how aliasing should work in the export case, and integrating functionalization into Executorch.

Thanks Will Constable, Nick Korovaiko + other LTC folks for help thinking through how to integrate functionalization with LazyTensor

Thanks to Jack Cao, Jiewen Tan, Wonjoo Lee and the the external folks from PyTorch/XLA (+ Ailing Zhang) for the initial version of functionalization, that much of this work was based on.